Announce found puppies, cars to be towed, local events and water repairs to people in a given area.

It took us some time, but we built it! Announce is now live on Web, Android and iOS plaforms. Get started now:

Earlier this year, we built Announce V1 and just before launching it, we realized that our architecture was so flawed, even 1000 users could make us bankrupt within a week. So we got back to drawing board, sketched the new architecture, and re-wrote everything from scratch.

Announce is a free-for-all platform that allows users to Create, and View announcements in any part of the world by specifying the area relevant for that announcement.

Pan the map to view announcements

Users on Announce can pan the map and they see the announcements in the area they are by panning map. The more zoomed in users are on the map, the more accurate Announcements get.

What can users Announce?

Literally anything that’s worthy announcing. Some sample examples include:

To Create an Announcement…

Draw the area on the map where the announcement will be visible, add details and done!

Draw the area where Announcement will be visible

Created Announcements are posted and made available immediately, and other users will see the announcements if they pan the map.

With Announce, users can create announcements and reach people in an area around them directly, regardless of whether they know them personally or not. We expect users to be creative in making announcements that are relevant for all (think railway stations, airports, festivals & events).

It is our endeavor to making communication in hyper local areas super fast, and accessible to all. 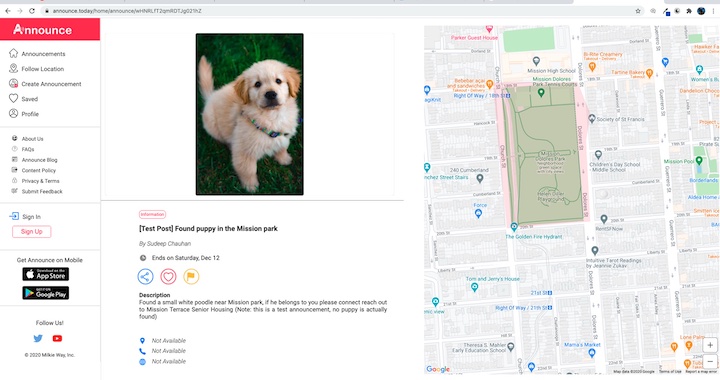 Imagine a world where

Above are just some simple examples, but the actual use cases are many, and we hope users make the most creative uses of Announce.

Visit https://announce.today , and make your first announcement! If you want to take time, just explore nearby areas, and maybe you’ll find some useful posts! :)

Official Press Release for Milkie Way, Inc. We working hard to bring free, scalable products to the world. Connect with us to hear the latest from our posts!